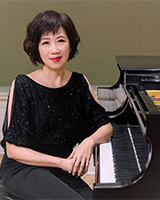 Fenia Chang has enchanted audiences from all over the United States with her beautiful tone as well as her wide range of repertoire. Her recent engagements have included performances on four continents at venues including Avery Fisher Hall and Alice Tully Hall at Lincoln Center, Carnegie’s Weill Recital Hall, Kennedy Center in Washington DC, Ecole Normale de Paris in France, the Mozarteum in Salzburg, the National Concert Hall in Taipei, the Cultural Center of Hong Kong, Concert Hall in Beijing and Shanghai in China.

The Washington Post hailed Fenia Chang as “truly one of the greatest pianists of her generation.” “Her impeccable techniques and music taste—superb tone and sensitive touch delivered under her full command of styles—rarely seen on today’s concert stage.” The New York Times praised her “refined technical mastery—combining vigor and suppleness with natural eloquence.”

In 2005, Fenia has become the first local pianist in the Dallas Metroplex to be invited to perform at the Greenville Entertainment Series in Texas. She has also appeared as a collaborative pianist at the National Music Teachers Conference in Texas and Nebraska Music Teachers Convention Concert, Academy of the West in California, the Gilmore International Keyboard Festival, Fox Valley Spring Festival in Chicago as well as her Duo-Piano concert tour to International Chamber Music Festival in Keelung, Taiwan, the Taipei Chamber Music Players’ Society tour to China, National Taiwan Symphony Orchestra Chamber Music Festival in Keelung, Taiwan.

Dr. Chang is a sought-after adjudicator, clinician and frequent presenter at music workshops in the Dallas Fort Worth area. She is also a frequent adjudicator at several prominent Metroplex piano competitions, with recent duties at TMTA Regional Solo Performance Contest in 2018, Collin County Young Artist Concerto Competition in 2016; DMTA Achievement Audition & Jazz-Pop Festival; North Texas Youth Music Competition in Richardson as well as other local festival events. She had performed appeared with world-renown musicians in chamber music concerts at most major cities of the State, as well as in Taiwan, China, Korea, Hong Kong, and France.

Fenia has served as the piano accompanist for the Children’s Chorus of Greater Dallas Women’s Youth Choir in 2008-2009. She also served as the Vice President of the Hunt County Music Teachers Association from 2002 to 2007. She was the founder and artistic director for Asian-American Chamber Music Society, and past board members for the Dallas Asian-American Youth Orchestra. She currently serves on the education committee board for Plano Symphony Orchestra in Plano, Texas.

Dr. Fenia Chang is currently on the Piano Faculty at Austin College in Sherman, Texas.

She has also served as a collaborative pianist at Southern Methodist University in Dallas, and was the former piano faculty at Texas A&M University – Commerce and Eastfield College in Mesquite, Texas.

Her bio is listed on the Marguis “Who’s Who in America” since 2005.

She currently resides in Plano, Texas with her husband Eugene Shen and two lovely children, Warren and Declan.