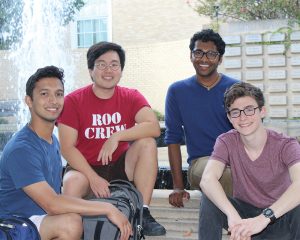 A beautiful thing about diversity is that it’s often simply dressed as friendship. Ganesh Maniam ’17 who is Hindu, found himself paired with Noah Selz ’17, who is Jewish, as freshman roommates. They were a great match, and when they wanted to move to different housing the next year, they needed two more roommates—enter Rohail Rahman ’17, a Muslim, and Jason Shin ’17, a Christian. Of course, the roommates didn’t even recognize the “diversity” of their living situation. Chaplain John Williams ’84 pointed that out later. The roommates simply are friends, and none is  superconscious of their “differences.”

They consider their diversity phenomenon a coincidence born out of friendship.

Ganesh said he was impressed that the refrigerator was always full because it takes a lot of groceries to accommodate the various diets … beef, no beef, pork, no pork, and traditional Korean, Indian, Pakistani, and Jewish dishes. Plus snacks. That’s a lot of groceries.

The roommates have attended social events at one another’s supporting organizations. The Hindu goes to the Jewish Rosh Hashanah celebration. The Christian goes to Diwali with the Hindu. They simply enjoy the opportunities to experience new things with good friends.