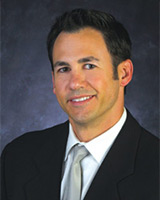 George Zoys ’91 is one of the best in his craft—no bones about it. Actually, he’s all about bones. George is one of Dallas’ top orthopedic surgeons; he’s been included in D Magazine’s Best Doctors list five times. As an orthopedic surgeon, he focuses on repairing bones and joints. He performs hip replacements, sports medicine, joint surgery, and arthroscopic knee surgeries. “With orthopedics, you see something broken, you fix it. You see the results right away,” he said. “And it’s fun working with saws and hammers,” he added with a laugh.

George came to Austin College because of its reputation as good preparation for medical school. His older brother had attended, and the College “had an excellent reputation, especially for medicine.” “The curriculum, if you were trying to get into medicine, was one that required a lot of studying and discipline. In order to get through it, you had to have certain habits, like hard work and staying up late studying. When you went to medical school residency, there wasn’t that much of a change,” he said. “I think that having strenuous course loads and a hard curriculum gets you attuned for what it’s like in graduate school and medical school.”

He majored in chemistry and participated in the Chemistry Society, the Physics Society, and intramural sports, before going on to medical school at the University of Texas Health Science Center in San Antonio, Texas. He completed a residency in orthopedic surgery there, at one of the top orthopedic surgery hospitals in the country.