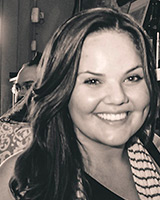 There were many classes and subjects that weren’t in my wheelhouse at Austin College, but the Spanish language came easy to me and it was fun. Although I had no idea as a 19 year old how I’d “put it to use” as most people always asked, I knew it was a natural choice for my major. Besides the obvious super cool benefit of being able to communicate in another language – I was a Communications major too, so obviously I enjoyed talking and now I could do it in two languages  – the monumental take-away for me, even all these years later, is how studying Spanish changed the way I think about the world. I experienced a newfound appreciation for people, things, and customs that were different than what I had known. I learned to celebrate differences in thought and opinion by participating in lively debates over whether Lorca’s character Yerma was right or wrong and by dissecting Marquez’s José Buendía for weeks at a time. Throughout my four years of coursework, I learned from mentors from Argentina, Spain, Costa Rica, and the United States, to name a few. How lucky was I to gain such wise yet different perspectives and viewpoints from some of the sharpest people I have ever known? I had no idea then how grateful I would be.

I worked in marketing and community management for seven years after college before I decided to stay home with my kids. I didn’t always put my Spanish major to use in the most obvious ways professionally, but I am positive it influenced my success in the real world by taking a green college student and opening my eyes to the whole, entire world.