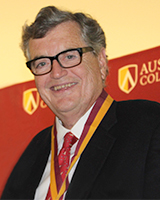 The Austin College community and many friends will honor alumnus James Rolfe on Saturday, February 15, with announcement of Jim Rolfe Court in the College’s Hughey Gymnasium of Robert T. Mason Athletic–Recreation Complex.

Rolfe, a 1965 graduate and former ’Roo basketball athlete, has remained active in the life of Austin College and Kangaroo athletics for more than 50 years. He has taken on several leadership roles, including a stint as president of the Alumni Board. His dedication and service to his alma mater have not gone unnoticed. When necessary physical upgrades to the gym were identified last year, including replacement of its court, the idea to fund the upgrade through a naming opportunity in honor of a devoted graduate began to circulate. Jim Rolfe’s name rose to the top.

Friends and family rallied at the opportunity to create Jim Rolfe Court. “We are blessed to have dedicated alumni who really care about Austin College, its programs, and its people,” said Athletic Director David Norman ’83. “This Saturday, we will honor one such individual, as well as the many alumni, friends, and family who have come together to recognize him through their giving toward this upgrade to the gym.”

“It is an honor to recognize Jim’s remarkable impact on Austin College, our student-athletes, and his entire network of family and friends with the naming of the ‘Jim Rolfe Court’,” said Austin College President Steven O’Day.  “His professional career and his service to his community, to his church, and to Austin College and our athletics programs, have been exemplary.”

Named a Distinguished Alumnus of Austin College in 2000 and inducted to the College’s Athletic Hall of Honor in 2007, Rolfe had a distinguished career in law in Dallas for five decades. Upon graduating from The University of Texas School of Law in 1968, he began his career as assistant city attorney in Dallas, then was assistant district attorney for Dallas County. He was appointed United States Attorney for the northern district of Texas by President Ronald Reagan in 1981 and received citations from several federal agencies for his performance in that position. He later went into private practice as a criminal defense attorney.

Alumni Joe Barrett, Class of 1968; Jerry Bishop, Class of 1966; and Steve Schiff, Class of 1971 were the ‘captains’ of the fundraising effort that includes 75 donors to date.

Hughey Gymnasium has been home to Austin College men’s and women’s basketball and volleyball programs for the past 70 years. Once fundraising for this project is complete and the basketball seasons conclude, the renovation schedule will move forward so that the court is in place by Fall Term 2020. For more information about this project or other phases of the Austin College athletics facilities master plan, contact Director of Athletics Major Gifts and Engagement JR Ohr at 903.813.2597.