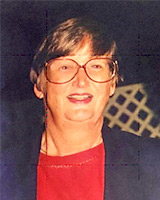 Dr. Fuller joined Austin College as vice president for Academic Affairs and dean of the faculty in July 1982. She was the College’s first woman vice president and was part of the executive cabinet, the chief advisory board to then-President Harry Smith.

Sadly, health concerns caused her to step down from her position at the close of the 1984 academic year. Her husband, Dr. Martin Fuller, was product research director for Lee Pharmaceutical Company in California at the time she moved to Texas. He joined the Austin College chemistry faculty in fall 1984.

Though she gave up her leadership position, Anne taught on the Austin College English faculty on an adjunct and visiting basis from 1985 to 1996. She served as acting dean of faculty in Fall Term 1990.

Before coming to Austin College, Dr. Fuller served two years as assistant to the president at Claremont University, and previously was dean of faculty and professor of English at Scripps College. She also taught at the University of Denver, Prescott College (Arizona), the University of Florida, Pomona College (California), and Mount Holyoke College (Massachusetts).

Anne Fuller died in the morning hours of May 22 at the age of 89.

Anne was born in 1932 in Pomona and lived her first four years in nearby Claremont, where her father, Paul Havens, taught literature at Scripps College. In 1936, Paul moved his family to Chambersburg, Pennsylvania, where he had accepted a post as president of Wilson College.

She taught for two years at her alma mater, Mount Holyoke, then accepted a comparable position at Pomona College, in Claremont, returning thus to her birthplace. She met Ph.D. chemist Martin Fuller at Pomona, and the two were married at St. Ambrose Episcopal Church in Claremont on June 17, 1961. Children Kate and Peter followed soon after in 1962 and 1963.

In 1973, she was offered and accepted the dean of faculty position at Scripps College. She later worked at Claremont Graduate University as assistant to the president, then moved to Sherman, Texas, where she took on the dean of faculty role at Austin College.

She was a gifted teacher who read voraciously and loved to learn. She instilled in her students a deep respect for English and other languages and cultures and their respective histories, as well as a love of Chaucer and other medieval literature, and Old English, including “Beowulf.”

In 1996, the couple retired to Albuquerque, New Mexico. Martin died in 2007, and in 2014, she moved to La Vida Llena Life Plan Community, where she led an active life. She swam every morning well into her 80s and continued to involve herself in book clubs and to share her love of literature and learning with her friends and neighbors. She will be missed by many.

In lieu of flowers, please make a donation in her honor to the American Cancer Society.