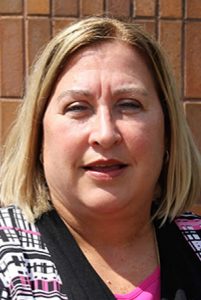 The family said Janet was involved in the activity of Christmas and gift delivery when she suffered a heart attack and did not survive it.

The quick outpouring of social media responses to news of Janet’s death evidenced the extent of her positive impact on the lives of many Austin College alumni. In addition to interacting closely with students of the 1980s and 1990s, she built relationships of a different nature with campus members as a parent during her daughter, Kate’s, years on campus.

Memories and comments may be shared on the funeral home Tribute Wall.

The following obituary was released by the family.

A graduate of Dayton Christian High School, Janet earned an undergraduate degree from Anderson University in Anderson, Indiana, an MS in Counseling and Guidance from Texas A&M University, and post-graduate work with a major in Higher Education Administration and minor in Sports Administration from the University of North Texas. Janet held professional posts in college administration for over 30 years, impacting countless students from her first post-college job at Wittenberg University in Springfield, Ohio, to Austin College in Sherman, Texas, and to her final position as senior development officer with Muskingum University in Ohio.

Janet was a pragmatist with a heart for her colleagues, students, and most of all her family. She had the unique ability to connect with anyone she encountered, from the waitress at the local restaurant to high profile alumni from Muskingum University. She was genuine and generous with her time and attention. She will be forever missed by those that knew and loved her. Although she achieved great professional success in the academic world, she was most proud of her children and proud to be their mother. Janet inherited her love of reading from her mother and her love of sports from her father, but her love of family defined her. Janet’s three children were her lifeblood and her soul will always resonate with her love for “Dee,” “Drew,” and “Boo.”

Services will be private for family and close friends only at Richards, Raff & Dunbar Memorial Funeral Home on January 4, 2021. Burial will follow at Glen Forest Cemetery in Yellow Springs, Ohio. In lieu of flowers the family requests donations to the Columbus Metropolitan Library.