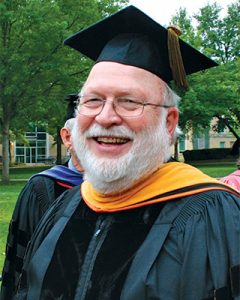 The Austin College community is saddened to learn of the July 15, 2021, death of Professor Emeritus of Physics Larry Robinson and offers condolences to his wife, Joyce, and their family. A Sherman memorial service will be announced sometime in the early fall.

Dr. Robinson joined the Austin College faculty in 1969 and spent more than 40 years teaching and interacting with students and colleagues. In that time, he taught nearly every physics class offered, considering it a challenge he was eager to take on. He particularly enjoyed setting up and developing labs and experiments and was quick to incorporate computers into his labs when they became available. He enjoyed teaching “Heritage: Models of Scientific Thought,” and working with new materials, other colleagues, and many more students than in his science courses. He also appreciated opportunities to incorporate his work in physics with other departments, like a course on the physics of music with Dr. Ricky Duhaime or how optics related to literature with Dr. Carol Daeley.

His initial specialty was nuclear physics but over time and with additional study, his main focus became the study of optics. He continued that study for several years, including a sabbatical during the 1980s as a visiting professor at the University of Rochester at the Institute of Optics. He received a National Science Foundation grant so that Austin College could purchase lasers and instrumentation to create an optics course.

Dr. Robinson spent his entire teaching career at Austin College except for graduate teaching assistantships as he prepared for his career. He earned his bachelor’s, master’s, and doctoral degrees at Virginia Polytechnic Institute. He worked for two summers at the Naval Research Laboratory in Washington, D.C.

Recognized many times for his teaching excellence, Dr. Robinson was named the Donald McGregor Chair in Natural Sciences in 1992 and received the Austin College Excellence in Teaching and Campus Leadership Award in 2003. He also served as Dean of Sciences and chair of the Department of Physics and participated in numerous campus committees and efforts. He served as sponsor of the Physics Society and as sponsor for Kappa Gamma Chi sorority for many years.

He retired in 2011, and he and Joyce moved to Austin, Texas, to be closer to their children and grandchildren.