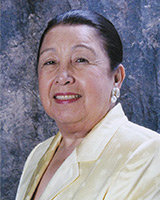 Former Austin College Board of Trustees member Teresa Lozano Long died March 21, 2021. The College community extends sympathy to her husband, Joe, who was always at her side.

Teresa “Terry” Long served on the board from 1999 to 2002, active on the Student Affairs Committee and the New Era Campaign Steering Committee. She and Joe were generous donors to the New Era Campaign, creating the Joe and Teresa Lozano Long Endowed Internship in Southwestern and Mexican Studies, the Joe R. and Teresa L. Long Endowed Presidential Scholarship, and the Joe R. and Teresa L. Long Sponsored Leadership Scholarship.

The trustee was also influential in the preparation of the 2008 Austin College project, “Writing Mexican-Americans into Seventh Grade Texas History Courses.” The College’s History Department, Center for Southwestern and Mexican Studies, and Austin Teacher Program joined forces on the project that resulted in new lesson plans made available to teachers throughout Texas. Austin College history students wrote the lesson plans highlighting Mexican-Americans in Texas history. The plans were prepared such that teachers could implement them in accordance with the state TEKS criteria. The project was underwritten by a grant from Humanities Texas, with additional support from Austin College’s Andrew Pickett Mobley Scholar Fund. A number of distinguished educators served as an advisory panel for the project, including Adam Benavides of the Benson Latin American Library at The University of Texas – Austin, Carolina Castillo-Crimm of Sam Houston State University, J. F. de la Teja of Texas State University – San Marcos, and Teresa Lozano Long of Austin, Texas.

Long earned her bachelor’s, master’s, and doctoral degrees in kinesiology from The University of Texas, where she and her husband have been loyal supporters and benefactors. She is the namesake of the Teresa Lozano Long Institute of Latin American Studies, created upon the $10 million endowment gift from the Longs for the institute.

The Longs met while both were teaching high school in Alice, Texas, and met again a short time later in Austin, Texas, and were married. She once said that since they did not have children, they would help as many children as they could.

They have done so, and Teresa received many awards for her dedication and philanthropy. She holds many honors from her alma mater, The University of Texas. She also was a recipient of the Texas Medal of Arts Award and an inductee into the Women’s Hall of Fame. She was honored by the Bullock State History Museum with its “Women Shaping Texas in the 20th Century” Award and was the recipient of the inaugural Madeleine Rast Award from the National Museum of Women in the Arts. She also was a 2019 recipient of the President’s National Humanities Medal.