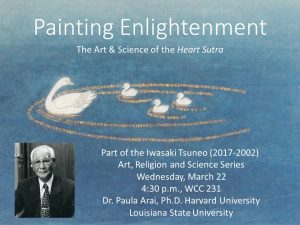 Austin College will host several events focused on “The Art and Science of Iwasaki Tsuneo” March 23-25 on campus. The events, sponsored by the Lowe Lecture Series, Asia Week, Biology Seminar, and Mellon Digital Pedagogy, center on the work of Iwasaki Tsuneo (1917-2002), a Japanese research biologist, Buddhist, environmentalist, and painter who integrated scientific principles from biology and physics with Buddhist philosophical ideas in a unique art form. All events are free and open to the public.

Guest speaker Dr. Paula Arai is a religious studies faculty member at Louisiana State University, and knew Tsuneo personally. She will present the lecture, “Painting Enlightenment: The Art and Science of the Heart Sutra” on Wednesday, March 22, at 4.30 p.m. in Wright Campus Center, Room 231. She will speak on his works and the intersection of science, Buddhism, and concern for the environment.

A Science and Humanities panel is scheduled for Thursday, March 23, at 4:30 p.m. in IDEA Center, Room 127.  As part of the Lowe Lecture Series, Arai will join science faculty Kelly Reed, David Whelan, Don Salisbury, and Mari Elise Ewing, and East Asian studies faculty Scott Langton and Mindy Landeck in an interdisciplinary panel discussion responding to the works of Tsuneo. Co-sponsored by the Biology Seminars program, the discussion will be informative to students in the sciences and several other disciplines. A reception in the Page Atrium of the IDEA Center will precede the panel.

Other events include an inkbrush interactive workshop titled “Brushing the Heart” at 11 a.m. on Thursday, March 23, in Wright Campus Center’s Johnson Gallery.

An exhibition of selections of Iwasaki Tsuneo’s works, curated by Ara and Dr. Ivette Vargas-O’Bryan, Austin College associate professor of religious studies who is coordinating the various activities, will be on display in the IDEA Center through March 24. The exhibit was installed by Mark Monroe, Austin College associate professor of arts, and students in his Art 495 course. A full exhibition of major works, “Wisdom of Compassion: The Art and Science of Iwasaki Tsuneo,” is on display through June 11 at the Crow Collection of Asian Art Museum in Dallas. Students in Vargas-O’Bryan’s religious studies classes will interact with the Dallas exhibit throughout the spring term.