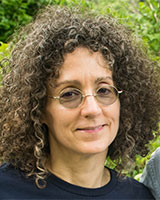 The George R. and Julia Blucher Jordan Chair of Humanities

Could everything be just a dream?  Does time flow, or all moments are equally real?  What is to be solid? to have a color?  Questions like these have fascinated me for as long as I can remember.  When it comes to answering them, I’d say that nothing beats looking to the world’s greatest thinkers for help.  Plato, Descartes, Hume, or Kant may not always be right, but when they make a wrong turn, it’s usually an interesting one that can teach us a lot.  Simply understanding their views takes us a good distance toward  answering life’s big questions.  The journey gets even better when we start to engage their ideas in careful, critical, and even creative ways.  Philosophy at its best is an on-going conversation.  It is as much an activity or practice as it is a treasure chest of interesting ideas and valuable information. The courses that I teach explore life’s big questions along the lines just sketched. Great minds from the past give us our starting points. We study what important recent thinkers have added to the discussion, and we extend the conversation by joining it ourselves.  This approach works well with just about every subject that I teach.

Most of my research focuses on the eighteenth-century philosopher David Hume.  His interests include epistemology, metaphysics, moral philosophy, and even history, but I tend to concentrate on his epistemology.  This is an area in philosophy that investigates the nature and limits of knowledge.  Hume raises some terrifically vexing problems about the justification of our beliefs, problems that continue to dog us today and that I’d encourage everyone to spend a little time considering.  Some of my own work explores them, but I’m also interested in Hume’s less skeptical and more naturalistic treatment of beliefs.  His ideas intersect with those of natural philosophers of the period (particularly Francis Bacon, Robert Boyle, and Isaac Newton) in surprising and instructive ways.  Lately I’ve been spending my time studying their attitudes toward analogies and examining their advice for identifying causes and effects.  Someday I hope to return to some problems that fall more squarely in metaphysics – ones that involve, say, color or the occupancy of space – but there’s lots worth doing in epistemology first.

I am the faculty sponsor of the Philosophy Club, and I direct the college’s Western Intellectual Tradition program. The Philosophy Club is a student organized group. It holds informal discussions on philosophical issues, watches philosophically-themed films, sponsors faculty panels on issues of philosophical significance, and does some service work.  The Western Intellectual Tradition (WIT) program offers an interdisciplinary minor in great books and great works of art and music from antiquity through the eighteenth century.  Minors in WIT not only read texts by such philosophers as Aristotle and Locke but have a chance to study the works of Cicero, Botticelli, Bach, Chaucer, and Sophocles, among many others.  A WIT minor is a great supplement to a philosophy major!