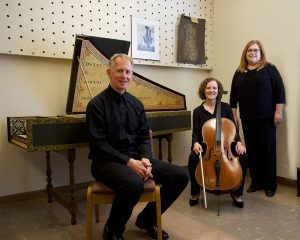 Austin College musicians Daniel Dominick, piano and harpsichord, and Sylvia Rivers, soprano, assisted by Leslie Whelan on cello, will present a Faculty Recital, Saturday, September 25, at 7:30 p.m. in Clifford Grum Sanctuary of Wynne Chapel. The recital is free and open to the public.

The program will include a number of classical pieces, including “When I Am Laid in Earth” from the opera Dido and Aenas by Henry Purcell, excerpts from Guilio Cesare by G.F. Handel, and excerpts from Le Nozze di Figaro by W.A. Mozart.

Selections from F.J. Haydn’s Canzonettas will be included, as will Claude Debussy’s “L’lsle Joyeuse.” Two numbers by George Gershwin will be on the program: “They Can’t Take That Away From Me” and “I’ve Got a Crush on You” as will be Cole Porter’s “Kiss Me, Kate” from So In Love, and Christine Lavin’s “Good Thing He Can’t Read My Mind.”

Sylvia Rivers, a native of Sherman, is in her 26th year as an adjunct instructor of music at Austin College. She has been an elementary music teacher, a high school choir director, and a studio voice teacher. She received her Bachelor of Music Education at Abilene Christian University and subsequently received her master’s degree in vocal pedagogy from Texas Woman’s University. She has taught in both public and private schools, has served on the faculty of Grayson College and Southeastern Oklahoma State University, and is frequently a soloist and clinician in the area.

Leslie Whelan moved from Virginia to Texas in 2014 after spending several years performing with orchestras and opera companies, and teaching Suzuki and traditional cello lessons. Currently, she is a member of the Sherman Symphony Orchestra and maintains a private studio. As education director for the SSO, she is devoted to making music education affordable and accessible. She received degrees in cello performance from Ithaca College and the University of Maryland.

Austin College, a private national liberal arts college located north of Dallas in Sherman, Texas, has earned a reputation for excellence in academic preparation, global awareness, pre-professional foundations, leadership development, committed faculty, and hands-on, adventurous learning opportunities. One of 40 schools profiled in Loren Pope’s influential book Colleges That Change Lives, Austin College boasts a welcoming community that embraces diversity and individuality, with more than 50 percent of students identifying as persons of color. The residential student body of approximately 1,300 students and an expert faculty of more than 100 educators allow a 12:1 student-faculty ratio and personalized attention. Related by covenant to the Presbyterian Church (USA), Austin College cultivates an inclusive atmosphere that supports students’ faith journeys regardless of religious tradition. The College, founded in 1849, is the oldest institution of higher education in Texas operating under original name and charter.