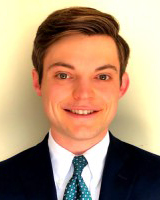 I can’t imagine a better place to receive a liberal arts education than Austin College. I was always planning to be a history major. But Hunt Tooley’s classes were so intellectually inspiring that I started reading some philosophy. Part way through my junior year, I realized that I wanted to major in philosophy, too. The only problem was that I was missing 7 of the 8 required classes! At almost any other school, the philosophy department would not have let me major in philosophy and still graduate in four years. But I worked with Mark Hebert, and we were able to figure it out.

Having the opportunity to study both History and Philosophy in depth was incredibly enriching. The professors in both departments were focused on having substantive conversations, and were not easily offended. Sensitive topics were not out of bounds, and everyone in the room was the better for it. In my classes, I was challenged to explain my positions orally and in writing.

At law school, my classmates are from many of the famous Ivy League and liberal arts schools on the east coast. I was intimidated by the fact that my competition had attended these name brand institutions. But I can say with confidence that the education I received as a ‘Roo was more comprehensive and better tailored to myself as an individual than the education that most of my law school classmates received.