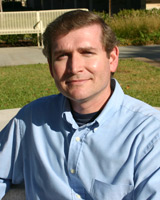 The Chase Professorship of Classical Languages

Taking Latin in high school revealed a complex world and a way of understanding the world that have fascinated me for over three decades. In my classes and research I examine elements of Greco-Roman culture from the perspectives of language (Greek and Latin), history, material culture, theory, and reception. My primary areas of interest are Roman oratory and the negotiation of social values, gendered speech and action in Roman/Hellenic culture, Latin pedagogy, and receptions of the ancient world in science fiction. I teach a wide variety of classes about the ancient world, in Latin and in English, as well as medieval Latin and paleography, and the modern reception of antiquity in film and science fiction. I also teach a course in Rome during the January term. I enjoy working with high school and middle school Latin teachers and their students, have been associated with the Advanced Placement Latin program for many years (including as Chief Reader), and am a passionate supporter of the Junior Classical League. I have had the good fortune to be honored by the Society for Classical Studies (formerly American Philological Association) with a national collegiate teaching award, by the Classical Association of the Middle West and South with a distinguished professional service award (Ovatio), and by Austin College with its Teaching Excellence and Campus Leadership Award.

“Disabled Hero, Sick Society: Sophocles’ Philoctetes and Robert Silverberg’s The Man in the Maze,” in Disability in Science Fiction: Representations of Technology as Cure, edited by Kathryn Allan (Palgrave Macmillan, 2013): 143-151.

“Caesar’s Qualities as a Roman General in the First Invasion of Britain,” in Using Context to Enhance the Teaching of Caesar’s De Bello Gallico, edited by Jill Crooker (College Board, 2012): 17-47.

“Vocabulary Testing in Latin,” in Strategies for Teaching and Assessing Vocabulary Acquisition in Latin. (College Board, 2008): 3-10.