Albion College Pleiad | May 1, 2013
Dr. Brian Watkins on his move to Austin College.

Chronicle of Higher Education | May 24, 2013
John C. Hitt ‘62, President of the University of Central Florida, was selected along with other higher education leaders to respond to questions in an article “What is College For?” (See attached article.)

Graphis.com | April 2013
Graphis Poster Annual 2013 is the definitive showcase of the 100 best Posters. Austin College received 3 of the 91 Gold Medals culled from the 1000 entries from around the world. All are theatre posters – Ghostlight, Subteranean Café, and V-Day won Gold and the 12th Night won a Silver.

Huffington Post | May 21, 2013
Dr. Kevin Simmons, is quoted in an article regarding economic impact on Moore, OK after the F5 tornado on May 20.

MuskogeePhoenix.com | May 5, 2013
Dr. Kevin Simmons is quoted in this article about tornadoes.

NBC News – Open Channel | May 29, 2013
In an article by Mark Schone “Midwest tornadoes increasingly resemble a giant game of Battleship”, Dr. Kevin Simmons is quoted regarding the geographical and population aspects.

New York Times | May 21, 2013
In his column “A Survival Plan for America’s Tornado Danger Zone”, Andy Revkin, at the NYT extended a quote from Dr. Kevin Simmons blog.

Vrindavan Times – Phoenix | May 7, 2013
The Austin College chapter of Hindu Students Association was fortunate to have the opportunity to visit Radha Madhav Dham during the Holi festival. 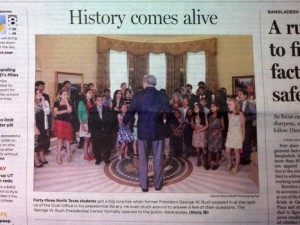 Dallas Morning News | May 26, 2013
Dr. Kevin Simmons is quoted in an article by Sarah Mervosh, “Finding Resilience, Faith Amid Tragedy.” REPRINTED WITH PERMISSION OF THE DALLAS MORNING NEWS.

Austin College | April 29, 2013
Dr. Robert Cape, faculty member at Austin College, has been honored by the Classical Association of the Middle West and South (CAMWS) with an Ovatio, the organization’s highest award for service to CAMWS and the classics profession.

Austin College | May 8, 2013
Videos and photo galleries of the Salman Khan presentation on the College campus and at the Perot Museum of Nature and Science  in Dallas.

Herald Democrat-Sherman | April 25, 2013
The Austin College Department of Art and Art History hosted the exhibit “Relative Proximity” by the Ghost Town Arts Collective in May.

Herald Democrat-Sherman | May 7, 2013
Austin College President Marjorie Hass will presented diplomas to more than 340 bachelor’s degree candidates and 18 Master of Arts in Teaching degree candidates in graduation events May 18 and 19 on campus.

Herald Democrat-Sherman | May 8, 2013
AC vocalists presented a concert on Saturday, May 11.

Herald Democrat-Sherman | May 12, 2013
The Sherman ISD Board of Trustees will soon welcome a new member as Tim Millerick defeated Andy Morales for the Place 3 seat.

Herald Democrat-Sherman | May 17, 2013
Many seniors anxiously awaited graduation ceremonies at Austin College, it was a week filled with intense studying and challenging finals.

KTEN News | May 9, 2013
Dr. David Baker, faculty member at Austin College, explains that lightning is similar in nature to static electricity we may feel throughout winter.

KXII News | May 6, 2013
Members of the Austin College Class of 2013 counted down the days until graduation.

MySherDenBuzz | May 9, 2013
One of the plaques on an interior wall of the Austin College residential cottages marks the site of 1108 N. Grand where T. Ellis Lockhart and his family lived for 53 years.

North Texas e-News | May 5, 2013
The 2013 Home P. Rainey award was presented to Dr. Michael Imhoff who will retire after 43 years of service to the College.