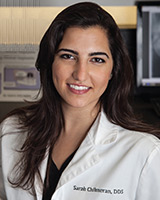 Sarah Chilmeran says her Austin College education played a big role in helping her achieve her dream of becoming a dentist. She was able to explore her future career, shadowing dentists during Career Study Off Campus (CSOC) experiences in Syria, Costa Rica, and North Texas. She was president of the Pre-Dental Society, which also allowed more discovery about her future career.

After graduating from Austin College in 2010 with a degree in business administration, she enrolled in the School of Dentistry at the University of Texas Health Science Center at San Antonio.

“Not only does Austin College have a well-known and respected pre-med program, but it truly develops well-rounded graduates,” said Sarah, who also was able to study in India during a January Term. “I see how well instilled the values of leadership, learning, service, and community are in my fellow graduates and in those that have come before and after me. “Anywhere you go, when you say the name Austin College, people have respect for the small liberal arts college in Sherman, Texas.”

Upon earning her degree, she returned to her hometown of McKinney, Texas, to serve her community through her work as a dentist.