The annual ATHENA Leadership Awards program hosted by Austin College for the last six years has been postponed indefinitely for 2020. 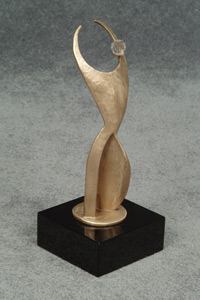 The ATHENA Leadership Award Program is administered by ATHENA International, a non-profit women’s leadership organization, along with licensed host organizations and sponsors. Over 6,000 awards have been presented in the U.S. and around the world since the program’s inception in 1982. Recent recipients include Condoleezza Rice, Billie Jean King, Pat Summit, and Gabby Giffords.

The ATHENA Leadership Award® is presented to individuals who have attained and embody the highest level of professional excellence in their business or profession, devote time and energy to improve the quality of life for others in the community, and actively assist women in realizing their full leadership potential.

ATHENA Young Professional Leadership nominees are emerging women leaders who demonstrate excellence, creativity, and initiative in their business or profession; provide valuable service to improve the quality of life for others in their community; and clearly serve as role models for young women both personally and professionally.

Save the Date
2020 Athena Leadership Awards

Criteria for the Awards

ATHENA Award and ATHENA Young Professional Award nominees must meet each of the following three criteria:

Qualifications - ATHENA Leadership Award nominees may represent either the profit or not-for-profit sector and must work and reside in Fannin, Cooke, or Grayson counties. Nominees for the Young Professional award must be 40 years of age or younger. Please make sure your nominee is eligible as previous ATHENA Leadership Award recipients are not eligible for nomination. However, past nominees may be nominated again.

The Process - A Selection Committee, made up of past ATHENA Award recipients, will review all (blinded) nominations and select the recipients based on levels of proficiency, commitment and impact in regard to criteria. The 2020 recipients will be announced at a luncheon Friday, April 24, at Austin College.

ATHENA Award Sponsorships - The ATHENA Award® program is a worthy investment. Your participation sends a clear message that your business invests in your community and its growth by identifying and honoring its leaders. 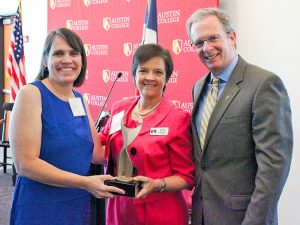 Sandy Barber of Bonham, executive director of Fannin County Children’s Center, received the ATHENA Leadership Award for 2019. The FCCC provides counseling services in a child-friendly environment and helps meet physical needs for families by supplying baby care items, clothing, and school supplies. Through 18 years at the center, Barber has led the effort to serve her area’s most vulnerable children. “Under Sandy’s leadership, the Fannin County Children’s Center has evolved from four staff members and a $160,000 budget to 11 staff members and a $780,000 budget to meet the growing needs of the community,” Austin College President Steven P. O’Day said in announcing the award. “Within her first five years in the position, she led a capital campaign to raise more than $150,000 to purchase, renovate, and relocate the organization to a 58,080-square-foot facility. She is now embarking on a second capital campaign; this time she aims to raise $4 million to provide for the needs of her community for decades to come.”

Nomination materials from Texas District Judge Laurine Blake on Barber’s behalf included praise for her work with children in the Child Protective Services or crime victims, as well as her efforts to secure an on-site deputy dedicated to investigation of crimes against children. Barber has been invited to serve on state associations for Texas CASA and Children’s Advocacy Centers of Texas. “Sandy’s reputation reaches ever further,” Judge Blake wrote. “We’re so lucky to have her in our midst.”  Barber also has invested in her community by helping establish events such as the Great Day of Service in Bonham and serving on many area boards. 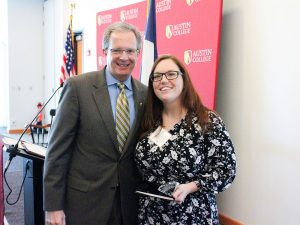 As clinical director, Dancer has increased the treatment team from two to five staff therapists and increased the Licensed Professional Counselors-Intern program capacity from four to six. She is a Registered Child and Adolescent Needs and Strength (CANS) assessment provider in the State of Texas and is the only provider currently providing CANS assessments in Grayson County for the CPS population, O’Day said in announcing the award. “Tiffany is known for her passion for helping people with mental health issues and providing a healing place for those who are struggling,” he continued, adding that she helped to found the Texoma Mental Health Professional Network and has played a pivotal role in bringing awareness to the mental health shortage in Grayson County. Nomination material from Stacy Rake of Sherman included praise of Dancer’s supervision of more than 10 interns working on master’s in counseling degrees. “Her willingness to supervise interns is helping to grow the mental health workforce, and that’s a gift she is giving to this community,” Rake wrote.

In addition to her professional work at the center, Dancer has worked with the First United Methodist Church youth group and consulted on the SISD 3-D anti-bullying campaign. She also leads a team from CFGC to participate in local 5Ks to benefit area groups, such as Women Rock, Sherman Police Association, Denison Animal Welfare Group, and others.

Coincidentally, both 2019 recipients happen to be Austin College graduates; that connection does not enter into the nomination or voting process in any way. A committee within Texoma Women Get Connected makes the selection based on the stated criteria. The annual award luncheon is sponsored by the Austin College Center for Community & Regional Development and the Texoma Women Get Connected program.

Austin College First Lady Cece O’Day and Sarah Campbell Stevens, co-chairs of the Texoma Women Get Connected Committee, made presentations to all finalists before the award announcements.

More About the Athena Awards