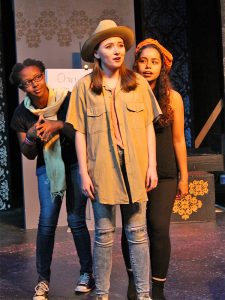 The Austin College Theatre Department will present the student-written and directed musical Seeking Grace this week, Thursday through Saturday, (October 24-26) at 7:30 each evening in Ida Green Theatre of Ida Green Communication Center. The production is free with a valid Austin College ID; other tickets are $8 each. The dialogue includes significant profanity.

Performances by the Austin College Improv Troupe will follow each evening’s presentation of the musical.

Written and directed by senior Hannah Barry, the a cappella musical is about a group of college theatre students who are producing a play. Even-numbered scenes portray the daily lives of these college students and the emotional issues they face; odd-numbered scenes are the play their department is producing. The main character of the play is a student named Grace, and Barry said a major theme of the show is the search for one’s self. This and other metaphors throughout the show led to the title Seeking Grace, Barry said. 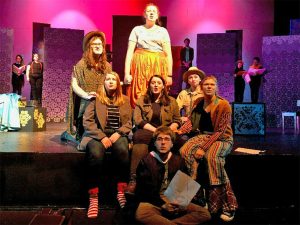 Barry said she has worked on this show for two years and that it is largely based on her own experiences and the lessons she has learned. “I’ve ended up describing it to people as my gift to the Austin College Theatre Department because it is my attempt to give back every lesson I have learned in four years,” she said. “I am so grateful for those lessons.”

Completing a major in public health and a minor in theatre, Barry said she sees theatre as an important vehicle for bringing change regarding public health. “Theatre is a place to have the conversations we can’t have elsewhere,” she said. “It’s difficult to talk about health and mental health. Theatre gives us a platform to address some of those issues.”  She explained that public health issues often are addressed by seeking changes in how people behave. “The most effective way to change behavior is to change the social assumption they live in,” she said. “If you want to change the way people act regarding their health, change the way they understand society. …. Theatre and media can change the way we present ourselves to each other and then change the way we understand our society. “

Written and directed by Hannah Barry of Saltillo, Texas.

Members of the cast: