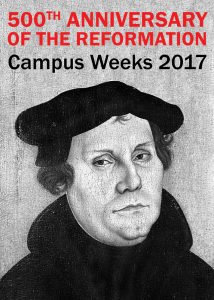 The Austin College German Program is happy to announce that Austin College has been invited by the Embassy of the Federal Republic of Germany in Washington D.C. to be a project partner and receive funding for Campus Weeks during the Fall semester 2017. The focus is the 500th Anniversary of the Reformation.

Martin Luther famously claimed that salvation could be reached through faith and by divine grace only. On October 31st, 1517, exactly 500 years ago, he posted 95 theses on the door of All Saints’ Church in Wittenberg, Germany, condemning the widespread sale of indulgence letters. Meant to shorten the time in purgatory by the intercession of the living, these letters were in fact a corrupt fund-raising tactic by the Catholic Church. Luther’s goal was to spark an academic discussion, but his action eventually led to a historic and theological upheaval that changed the Western world fundamentally. Luther’s Bible translation from 1534, was the first complete translation in German and had a major impact on the development of what would become modern mass media.

Events and exhibitions commemorating Luther’s role in German and European history are taking place in Germany, in the U.S. and all over the world, including some that also show the reformer’s “dark side” such as his anti-Semitic leanings that were later instrumentalized in Nazi propaganda to justify agitation and violent actions against Jews.

“We live in a world where we continuously participate in and witness a fast moving media revolution that significantly impacts how we think and how we act. In Luther’s time, it was the newly developed printing press that revolutionized how information spread since pamphlets were now mass-produced and widely distributed, thus quickly morphing into a powerful tool of mass propaganda that led to tremendous social changes in Germany and elsewhere.”

Events of the Campus Weeks at Austin College will include a photo competition. On Monday, November 6, there will be a baking contest in the Jordan Foreign Language House, hosted by the students of the JFLH German House and the German Club. Top bakers will receive attractive prizes. On Thursday, November 9, there will be an evening of crafting lanterns in the JFLH, followed by a lantern parade. Details regarding events and deadlines will be announced, as they become available. 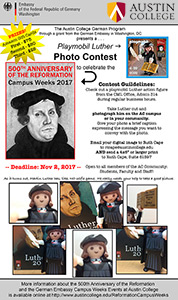 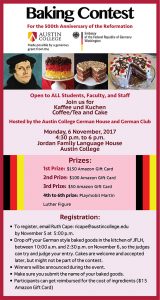 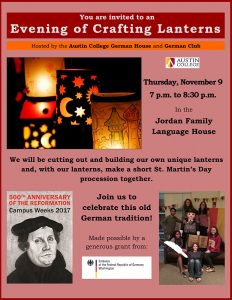 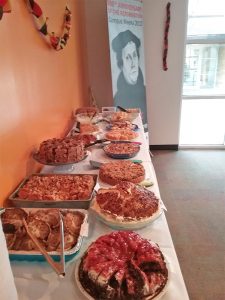 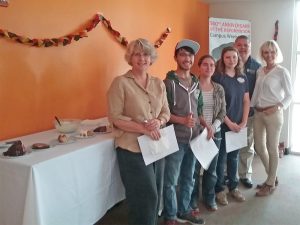