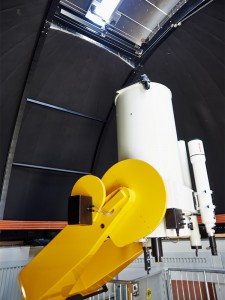 When you visit the Austin College campus, you can’t miss the shiny silver dome atop the IDEA Center.  Housed inside is our 24-inch telescope — the largest research telescope in north Texas.  Affectionately named “Rose” by its manufacturer DFM Engineering (after the Yellow Rose of Texas), our state-of-the-art telescope hosts a suite of instruments used for teaching, research, and outreach.

Student projects using Rose can be found on the Student Research Page. 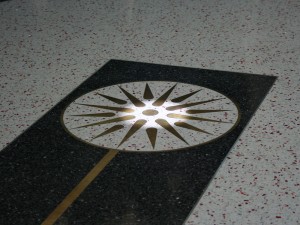 The atrium of Austin College’s IDEA Center showcases another state-of-the-art observatory — for the 16th century!

A gnomon hole in the roof casts a beam of sunlight across the atrium.  At high noon (when the sun is at its highest point in the sky), the Sun’s image crosses a meridian line on the atrium floor.  Equinoxes and solstices have special markers to illuminate the cyclical passage of time.  This type of observatory was installed in European cathedrals over 500 years ago to measure the Sun’s movement and predict the calendar. 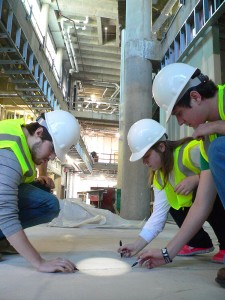 The Solar Observatory in the IDEA Center pays tribute to western, eastern, and indigenous cultural contributions to astronomy.  The Macedonian symbol of the Sun marks summer solstice, the Chinese Sun symbol showcases the equinoxes, and the Mayan symbol of the Sun celebrates winter solstice.

Austin College students were instrumental in the design and verification of the meridian line.

The IDEA Solar Observatory and Meridian Line is the first of its kind on a college campus in the United States, and perhaps the world!