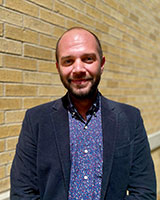 In my literature classes, you can expect to contribute to wide-ranging discussions about major and minor works in French. You can expect to develop strong and intelligent opinions about Balzac, Proust, Djebar, Duras, Houellebecq, Rousseau, Marie de France, Sand, and NDiaye, to name a few. Learning the methodology of French literary studies, you’ll discover how works of literature are more than works of art: they also reflect the fears, hopes, and material realities of the period and people that produced them.

In language classes, you’ll be immersed in French, leading to confidence and competence within the first few semesters. You’ll discover the richness and nuance of authentic documents early in your language-learning career, reading books and watching films in French and discussing them in class.

My book project, “Literature Under Siege: Reading and Writing during the Siege of Paris 1870-1871” reveals a moment of French and world history when literature had the potential to topple regimes, inaugurate new ones, and reshape how readers and citizens understood their place in politics, history, and society. An archival project, this book will shed light on an unprecedented moment when Paris, the “city of lights,” went dark. Prussian troops blockaded Paris completely for four long winter months, leading to the end of the Second Empire and the beginning of a period of famine, idleness, bombardment, and boredom. During the siege, literature in the widest sense of the term–books, letters, diaries, theatrical performances, and newspapers–became citizens’ best and only way of making sense of themselves within their historical moment.