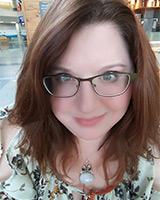 My fascination with Asian culture dates to a childhood attraction to Asian visual art, and I have now been professionally engaged in the field for two decades – an undergraduate certification in Asian Studies in my home state of Colorado led to a master’s degree program focused on premodern Japanese literature at Yale University in 2000. Subsequently, I became a teacher of Japanese language and culture, as well as Asian history, at Colorado State University (my undergraduate alma mater). My love of mentoring students both in and outside of the classroom later led me to the University of Kansas, where I completed the Ph.D. in East Asian History in 2015. My personal research centers upon Japan’s early modern period (1600-1868), tracing intersections between the political and artistic realms. I’m delighted to put these experiences to work with students at Austin College, where the value of interdisciplinary approaches to content are recognized.

At the University of Kansas:

Through the University of Colorado’s Program for Teaching East Asia (online):