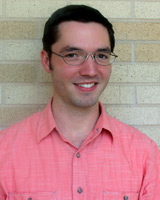 I am an astronomer, which means I try to understand the nature of space using physics. I am passionate about sharing my interest in the universe with my students, using the Adams Observatory especially.

My passion dates back to an introductory astronomy course that I took as an undergraduate (I was a music major at the time). Since then, I have enjoyed a variety of rich experiences exploring the Universe, the results of some of which I highlight below.

When I am not looking up, you may find me taking walks, or reading books, and only rarely doing both at the same time. I play the ‘cello, but my wife’s the professional. Occasionally I put holes in the walls of my house in an attempt to fix things (my kids love to watch this), and every once in a while I convince myself to cut the lawn. But not in this weather.

Stars are where it’s at for me.

As an undergraduate, I studied young, intermediate-mass stars spectroscopically. Then, as a member of the Spitzer Space Telescope Infrared Spectrograph (IRS) Team, I was involved in projects to study the end of life for massive stars, and the births of thousands upon thousands of new stars in what are called starburst galaxies.

I entered graduate school to learn everything I could about how stars form, and I did some interesting and original work on massive star cluster formation and early evolution.

There is a host of unanswered questions about stellar astrophysics that interests me, and I love to study them with regards to high- and intermediate-mass stars. I began this journey using the Sloan Digital Sky Survey’s APOGEE instrument to study what are known as emission-line B-type (Be) stars. My main research focus these days is to accurately categorize a large sample of massive stars, with a long-term goal of spectroscopically tracking small variations in temperature and power output over time. Studies such as these are at the bedrock of our understanding for how stars change with time.

A full list of my publications, kept up-to-date, can be found online. Below are some highlights from that full list.

Work Using the Adams Observatory (students and AC faculty are in bold and italics):

Amateur astronomers who are interested in spectroscopy should consider attending the Sacramento Mountain Spectroscopy Workshop, which is an excellent opportunity to get involved with like-minded enthusiasts.

I have an interest in ancient astronomical views that I share with several colleagues. With Dr. Bob Cape in Classics, I have spoken to students at the Texas State Junior Classical League. I have also used my time teaching JanTerm to expand my knowledge of diverse cultural perspectives of the night sky, and Dr. Brian Watkins in Anthropology has been kind enough to share his insights with my students.

Our physics students are chapter members of the Society of Physics Students. I am also the faculty advisor to the Physics Honor Society, Sigma Pi Sigma.